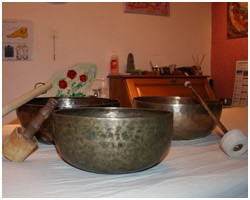 They blow hot and cold, they lay hands, they handle, magnetize, set broken limbs, treat with plants, pray…, they often alleviate pain and sometimes miraculously cure some illnesses that official medicine cannot manage to heal despite their knowledge and their whole stock  of drugs.
Are the spectacular results obtained by some magnetizers the effect of the techniques they use even though their real power looks so flimsy, or mere suggestion? Some placebo effect? Are those effects the proof of an innate or learned gift? Some gift given by God? Some particular ability to trigger self-healing?
The fact remains that lots of healings come so all over the world. Being unable to explain such phenomena the medical profession who pretend to hold absolute medical knowledge cannot help pouring scorn and insults on healers.

Who are those empiric practitioners whose best diplomas are patients’ tokens of gratitude?
Who are those healers who get amazing remissions of illnesses which cannot be cured successfully by official medicine? Those  men or women who with bare hands, only thanks to their only gift they say God has given to them, or some skill they has been transmitted through generations, rebalance and cure sick persons? They are generally ordinary people with elementary common sense, believers who once happened to discover their natural gift and gave up  everything by love for their fellow humans.
Those who grow richer are not necessarily the best and the most efficacious practitioners.  The good ones have got many more patients than they can cure. For them  it is a vocation. They do not need any publicity. The patients whom they have been able to heal are the best advertisers for them.

Despite those peculiar and indisputable achievements the French healer, whether he is a magnetizer, a psychotherapist or a bonesetter, has not got  any legal status whereas legislation against his practice has grown stronger. There have never been as many healers as these days. We have lost count of them, perhaps about ten thousands. More and more citizens think that actions brought against true healers and alternative medicine in general by the defenders of official medicine is quite improper as long as that sort of medicine will be unable to cure all the sick without any exception.
The important thing for who is suffering  is to be relieved, it does not matter how.

The ideal solution would obviously be that some close collaboration might be established between healers and doctors. Therefore the idea of altruism, disinterestedness and vocation should prevail. Let us not dream!
In the present time there is big money involved in any action. Social health and medical business are linked. They fear they should share the profit with those  scroungers  who practice some “wild” medicine.  What does it matter whether the sick go on suffering  as long as their profitability is being ensured..

Healers  sometimes get therapeutic results that doctors cannot get by means of usual scientific techniques’(Abbé Marc Oraison, priest and doctor). The marvellous French word “guérisseur” is derived from  old French “garir”, which means defend, preserve, in relationship with  the Provençal “garita” which has given the French word “guérite”(sentry box, cabin, shelter). A trace of it was already  to be found in “La Chanson de Roland” (XIth century) where “guarisu” meant “guérison” (healing). Only in 1878 “L’Académie Française (The French Academy) agreed with the use of  the word “guérisseur” (healer):  "Ne se dit guère qu'en mauvaise part, d'un médecin peu instruit, d'un empirique. Ex. Ce malade avait foi aux guérisseurs." (Only said in bad part for a badly  learned, an empiric doctor. Eg. That sick had faith in healers.)
In 1983 the “Grand Dictionnaire Encyclopédique Larousse” still gave a pejorative meaning of the word: "Personne qui prétend obtenir la guérison de certaines maladies, par des procédés secrets, incommunicables, sans vérification scientifique démontrable (fluide, don, médication mystérieuse réputée infaillible, etc.) et qui agit ainsi en contravention avec les lois sur l'exercice de la médecine." (Someone who claims to heal certain illnesses with secret, incommunicable methods, without any scientific proof (fluid, gift, mysterious famous for infallible medication and so on…). and who acts contravening the law on practising medicine.)
Only "Le Petit Robert" remains objective : "Personne qui fait profession de guérir sans avoir la qualité officielle de médecin, et par des moyens non reconnus de la médecine".(Someone who professes to heal without having the official authority as a doctor.) For us that beautiful word ‘healer’ includes all the people who cure, relieve, gripple with illness and protect human beings, animals and plants.
Moreover the term ‘healer’ covers several  specialities. Some traditional ones such as magnetism, radiesthesy, bonesetting, care with medicinal herbs, some modern others such as ostheopathy, phytotherapy,  sophrology, and so on…
Moreover, dentists, veterinaries or physicians are not excluded.  More and more magnetizers being doctors and dental surgeons replace anesthetic  by hypnosis
The healer, whether he is a medical doctor or not, has got some gift for healing, whereas a doctor with a degree, often without any vocation has acquired after long years of study only the minimal knowledge that allows  him to treat ill persons on payment. The true healer really thinks that his healing power is not a privilege but God’s gift which he is the humble and revocable depositary of.

Ambroise Paré, one of the greatest doctors in all times has said: ‘I treat the disease, God heals’.

How do you become a healer ?

That gift is hereditary but it is far from being a rule.
There are dynasties of healers but the descendants are seldom as talented as their ancestors.
More often than not the future healer gets conscious of his gift by chance. The best and most honest  gifted  ones learn with their elders, the rest comes by word of mouth.

In general a true healer who is often of modest descent is not satisfied with working on the assembly. He sharpens his natural gifts by study, he broadens his mind and improves his methods.
The most difficult thing is to keep one’s senses when success is there.

Beside that elite, you find all sorts of practitioners. From sincere and modest country bonesetters who from father to son set humans’ and animals’ fractures, passing by the saint hermit living in seclusion in the  mountain , the woman farmer whose breath performs miracles, the one who removes minor skin problems, the “knesotherapist”, the village sorceress who picks up  medicinal herbs to some eminent charlatans  who are invited to come on television stages, are regularly interviewed in popular broadcasts and drive their Toll and swindle suckers. There are thousands of more or less known, more or less honourable or efficient empirics.

Nowadays lots of persons not particularly suited for the job, little or big swindlers, even fools taking advantage of the fact that the profession has not been regulated yet, try their chance like in Far West duping credulous people in doing advertising and vanish for some time before reappearing somewhere else.

Online consultation In the press