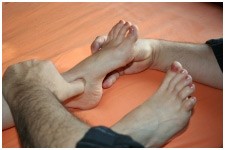 Here are some cases of healed diseases. Some cases were hopeless.

A 4 year-old girl had been constipated for one week in spite of rectal injections. She got relieved two hours after the session. A second session took place one week later. She has not had any more problems since then.

Oesophagus Burns due to gastric reflux

A 6 year-old girl suffered from that disease since she was born. Specialists had not been able to find the cause. Two sessions were enough for her to be healed.

Two sessions were enough for a young man to get rid of that trouble he had been suffering from since his childhood.

A 72 year-old lady had them on her buttocks. An 8cm broad inflamed strip kept her from sitting down. She was relieved after two sessions (in a week).

A 5 year-old boy's body was covered with under skin warts that burst suppurating. One first treatment cured the pustules, a second and a third one removed the marks definitely

A 7 year-old boy suffered from oedema since she was 18months old. His body was swollen. He hardly urinated. He came three times, he lost 15% of his weight in water. The process of elimination started back normally.

A young footballer wrenched his foot. There was no fracture. I used touch healing. I put my hands on the wounded place . Pain disappeared at once. A few days later he could play football again.

After a bladder operation a patient could not urinate any longer. She suffered from cystitis. Only one session was necessary to heal that person.

Giddiness and buzzing in the ears

Solved after one session

A patient who regularly suffered from cervical pain could be healed once his ankle energies were unblocked.
I had located the cause: an ankle that had been sprained long ago.

A 6 year-long blocked shoulder could be unblocked in one session. The patient escaped an unnecessary operation.
Thanks to transfer of magnetism muscles and tendons relaxed.
The shoulder found its place back and the arm could move normally again.
It was the same for a young lady who could only walk with a crutch. I put my hands for ten minutes on her thigh. Magnetism freed the muscle which found back its elasticity. She could do without crutch.

Lots of dermatology problems are caused by stress. I can heal eczema, psoriasis, warts and other skin diseases.

In three days I healed a spotty girl.

A 32 year-old young man had been suffering for one year of urinary infection. He had taken various antibiotica in vain. After trying all sorts of other remedies he made an appointment to a session. I treated him. The next day he was healed the. One month later he came back. He had no more problem .

I treated an insomniac man. He got up several times a night. It had been lasting for years. By now he has been able to sleep for 7 uninterrupted hours.

Helpful for students preparing their exams. Their innermost fright is released. Their concentration power increases.

According to the latest American research it is actually due to a breakdown of balance between hypophysis and adrenal glands.

It originates in the storage of emotional shocks (fright, death, breaking off of relationships, bullying in the workplace...). Those shocks lock doors and prevent energy from flowing freely.
Nervous breakdown not only destroys the patients but has harmful repercussions on his or her nearest circle too.
Those blocks can be found on acupuncture meridians.
By directing energy through the hands on those points the "doors" get open and energy can flow again.
So doing mental also gets free.

Nervous breakdown is not an incurable disease. No matter how much time it has lasted.
A successful treatment implies a precise planning of the sessions:


The patient can feel better very quickly and durably on condition he has attended the whole series of sessions. It is worth noting that by treating the whole body all kinds of various diseases related to nervous breakdown such as sleeplessness, constipation are cured at the same time.

Online consultation In the press